On Sunday, Josh and I got up super early to hike to Hanakapi’ai Falls. The hike is about eight miles round trip and we wanted to have enough time to come back and shower before we checked out. We were both really excited to be back on the Kalalau trail for the first time since our “first date”. We had MUCH better weather this time…no rain at all! The first two miles of the trail, we had already hiked when we hiked to Kalalau beach last year. The views of the Na Pali coast are stunning even a half mile in. 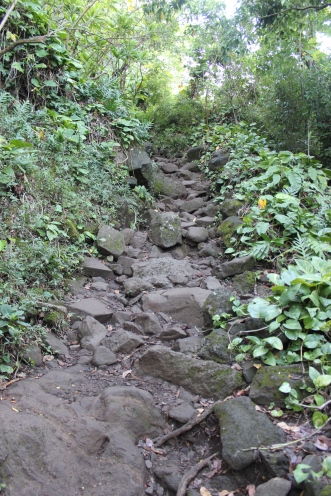 The start of the trail..the first half mile is all uphill on these boulders. 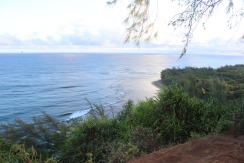 View of Ke’e beach (where we began the hike). 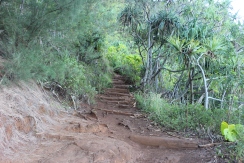 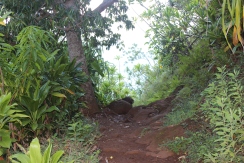 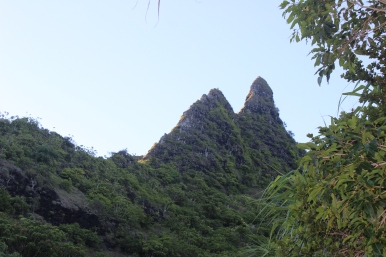 The first glimpse of the Na Pali coast. Never gets old.

This was a much steeper drop off than it seems in the picture! 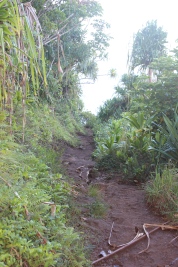 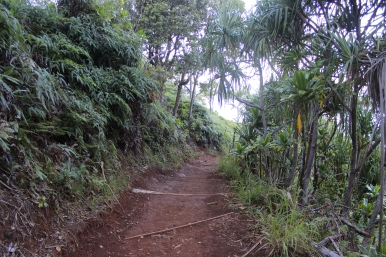 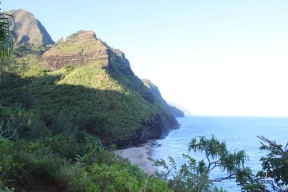 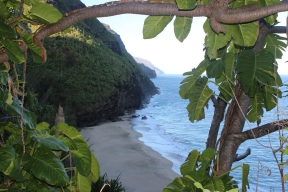 We made it to Hanakapi’ai Beach in about an hour. It was amazing to see the beach as it was completely covered by the ocean in the winter when we hiked last year. It was practically empty when we got there. 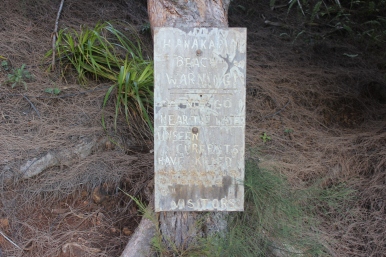 We took a picture of this sign on the way back from our hike last time. It marks the number of people who have lost their lives at the beach.

Last time we crossed this river we had a rope tied around our waists holding us together. We also had water up to our chests and there was nothing but rushing river water and open ocean. Terrifying. 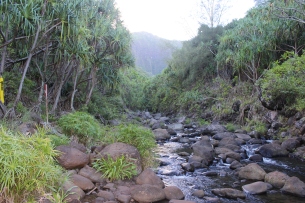 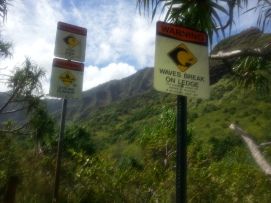 Looking at the river on the day we hiked, you would think these signs weren’t necessary!

After we crossed the river, we veered to the left instead of the right to hike to Hanakapi’ai Falls. The hike itself wasn’t too bad…we crossed the river about three more times on our way to the falls and it took us about an hour and a half to get there. The waterfall itself was absolutely amazing. The most beautiful waterfall we have hiked to yet (and we’ve hiked to A LOT). It was HUGE! Definitely worth waking up early for! We spent about 15 minutes at the falls and then started on our way back. Most people hike there to swim and enjoy the pool, but we didn’t have time to stay that long. Maybe next time! 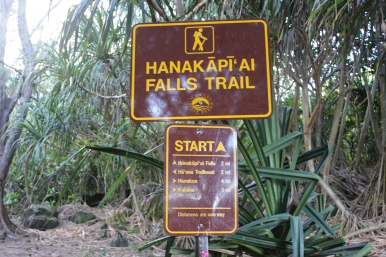 An old wall at the beginning of the trail.

The valley we were about to hike in.

HUGE bamboo. Tons of different groves of it. 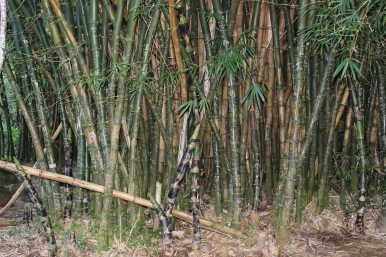 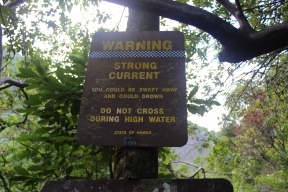 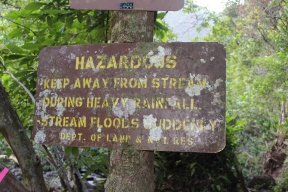 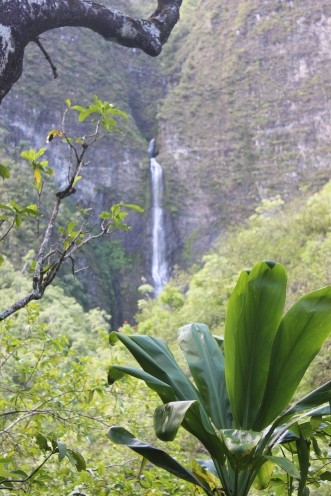 The first glimpse of the falls. 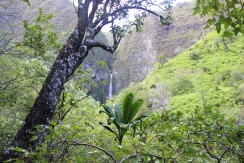 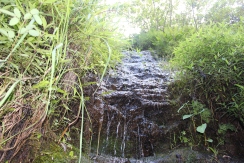 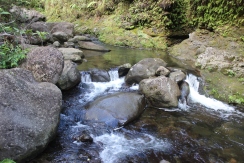 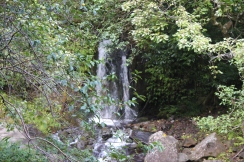 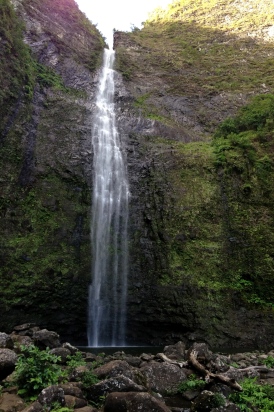 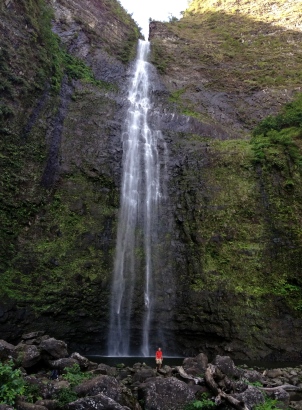 There was one other person there. He is standing closer to the falls. I took a picture with him in it to show how large the waterfall is. 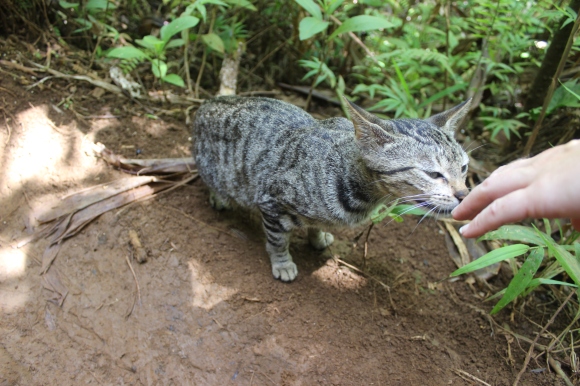 We found a cat on the trail back. So sweet!

After we finished our hike, we headed back to the hotel to quickly shower and change. We were both starving, so we visited Kauai pasta. It was so delicious, but we were so hungry I completely forgot to take pictures of our amazing food! After stuffing ourselves, we headed north again to visit the Kilauea lighthouse. We visited this last year, but it was under renovation. I wanted to go back and see it now that all the renovations were completed. Surrounding the lighthouse is a bird sanctuary. It’s absolutely stunning with water on all three sides of the lighthouse and beautiful birds flying all around! 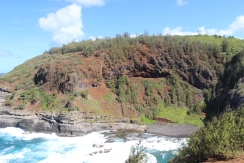 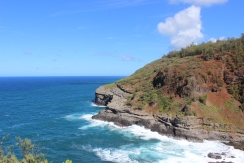 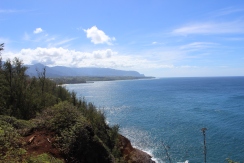 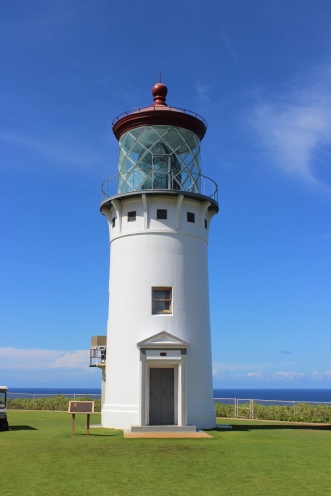 After that, we headed to the airport to catch an earlier flight than planned. We were exhausted and ready to come home!