Yesterday, after presents, breakfast and facetime with the family, Josh and I went to Spitting Caves to try out my super awesome new camera that he gave me for Christmas. It takes AMAZING photos…I think we took almost 100. I will spare you from all of them and just post the best ones! Spitting Caves is located in Hawaii Kai surrounded by the most expensive real-estate on the island. It is incredibly beautiful. People actually cliff jump off of the rocks…which is pretty dangerous. We just sat and took pictures and enjoyed the beautiful scenery. The reason for the name: when water and air rush into the cave it “spits” water out pretty forcefully. The spray connects with the sun and creates a rainbow. It’s quite unique!

The Spitting Cave in Action

The spitting cave before, filling up with water.

The cave about ready to “spit”.

You can see the rainbow it creates!

Getting ready to fill up with water again.

Looking straight down to the Spitting Cave.

Walking to look down at the Spitting Cave.

Me with the sun and beautiful ocean behind me.

There were divers (insane b/c the water was so rough) and the boat was hanging out waiting on them.

Apparently I was contemplating something.

Jealous of this guy!

Not sure why this was blocked off.

Close up of the rocks.

More waves crashing on the rocks. I love it. 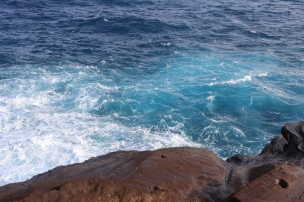 I love that you can see the different shades of blue in the ocean. 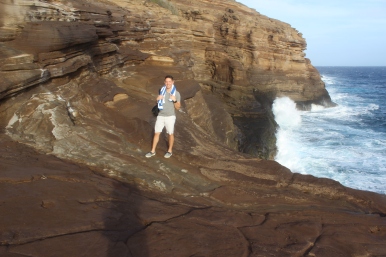 Josh and the waves crashing on the rocks. Cool picture.

One of the ridiculous houses.

Me admiring the waves crashing on the rocks. 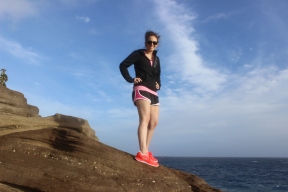