This past Saturday, Josh and I hiked the old Pali road to the Likeke waterfall. We started at the Pali Lookout and headed down the old Pali road (the Pali is now a major highway that takes you from Honolulu to Kaneohe). The hike was a little over three miles roundtrip…it was incredibly windy at the Pali lookout, so we jogged the first part down the road. We then came to a point in the trail where you can continue on to the Maunawili Trail or go left and climb under the current Pali Highway. To get to the waterfall we climbed down and under the highway and continued on through the woods. It was a super fun trail and a great workout as the entire way back up is uphill. The waterfall, while one of the smaller ones I have seen, was beautiful. There were also some great views along the way and at the falls. Great way to spend a Saturday afternoon!

A sign warning us of bees during high winds. It was incredibly windy…no bees though. 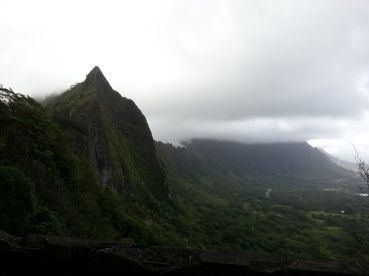 The view looking back towards the lookout.

A slightly different view than the Pali lookout.

Looking back up the road after we came down from the lookout.

Start of the trail after the road closed sign

Where we had to crawl under the current highway.

Graffiti under the highway. Pretty cool.

Panoramic of under the highway. 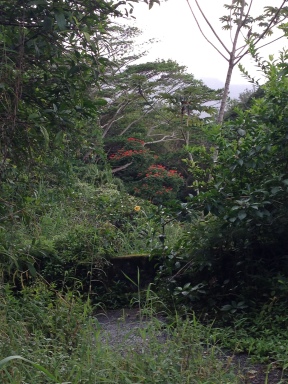 Walking down the path on the other side fo the highway. Pretty flowers.

Steps..the start to the next part of the trail to the falls.

Pretty view looking out towards Kaneohe from the falls.

Once again me forcing Josh to take his picture. 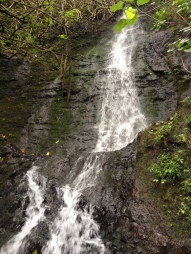 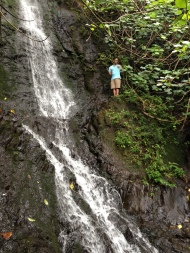 A teeny, tiny frog was hanging out in the pond below the falls.

Me under the road.

Coming back up the old road.

It was my turn to be forced into a picture.