On Saturday, Josh and I arrived bright and early on Maui to celebrate my friend Laura’s wedding. Our plan was to meet them around 9:30 to do the Four Waterfalls hike on the Road to Hana. Since we landed a few hours before that, we decided to stop in Paia for breakfast and to kill some time. However, before we even made it out of the airport Josh’s bag decided to quit on him. In a matter of 30 seconds he had all three straps break. First, the carry strap, then he picked it up by the handles and one of them broke and then finally we started walking again and the last one broke. He had to carry it the rest of the way without any handles. This early in the morning, we found it absolutely hilarious as it just disintegrated in front of us.

Josh and his disintegrated bag in the Maui airport.

We headed to Charley’s in Paia because we were starving and it had great reviews for breakfast. I ordered the breakfast burrito and Josh had an omelet. We had planned on sharing (thank goodness) because mine was HUGE. I ate about 1/4 of it and made Josh eat the rest. All of it was delicious and I would highly recommend it to anyone. To top it all off, it is Willie Nelson’s favorite place for breakfast and we are 98% sure he walked in as we were finishing and hung out at the bar. 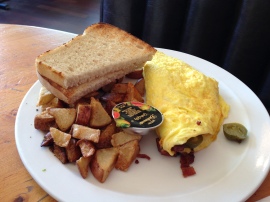 After breakfast, we changed and headed towards Hana to where we would start our hike. The hike would take us to four waterfalls. Two of which you could see staying dry. If you wanted to see the third and fourth waterfalls, you had to swim. We came prepared with our dry bag so we could take our camera to take pictures. We met up with everyone (SO HAPPY to see some of my best friends) and then started the hike. There were about 20 people total of friends and family that had come for the wedding. We hiked to the first and stopped for a bit to take pictures, then continued to the second to take more pictures. After that, we hiked up a ladder (with the help from a few ropes) then boulder hopped to the stream where we had to jump in to swim to the third waterfall. It was a BLAST!!! We all jumped in and swam up to the third waterfall. After that, we had to climb the falls and boulder hop again upstream to get to the final and biggest of the falls. It was beautiful! But I will say, the journey is what made it so fun. It was a great hike to do with a big group of people. See the pictures below! 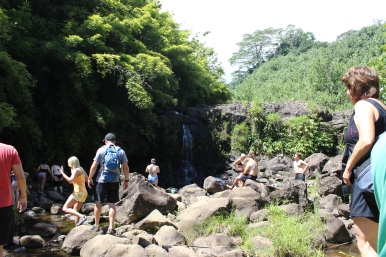 The first waterfall with everyone hiking over boulders.

The view downstream from the first waterfall.

Brent and Colleen at the second waterfall.

Laura, Colleen and I at the second waterfall.

The beginning of the boulder hopping.

People starting to boulder hop after climbing up the ladder. 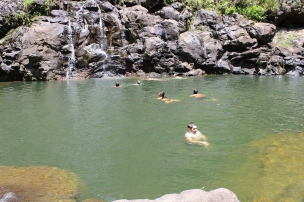 Swimming at the fourth waterfall.

We were a large group! 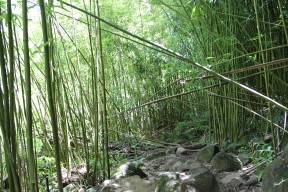 The beginning of the hike was almost all bamboo forrest. It was beautiful. 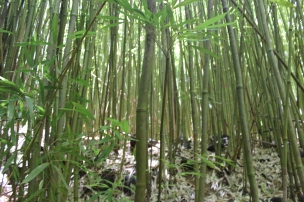 Loved this picture looking at the sky.

A little bridge we had to cross over to get to the first falls.

After returning from the hike, we changed and drove back through Paia for lunch. We stopped and ate at the Paia Fish Market. It was delicious! Josh had a sandwich and I had blackened cajun fish. We then wandered around the town and headed to our hotel in Makena to check in and take much needed showers.

We checked in and then headed over to Big Beach to hang out with everyone for the rest of the day. It was beautiful and the sun was setting. After that, we headed back to the hotel and got ready for dinner. We all met at the bar in the hotel to just hangout and eat. I had one of the best cocktails ever (Dancing Koi). I don’t even know what was in it but it was fantastic. After hanging out and dinner, we all called it a night and headed to bed. It was a long day!

Laura and Jim hanging out on Big Beach. 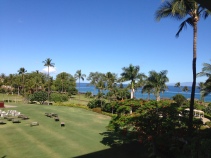