For my first inter-island trip, Josh and I went to Molokai for four days. It was quite an adventure. Molokai is located 25 miles east of Oahu and is 38 by 10 miles and has a population of about 7,000 people.

Our plane to Molokai

We left on the first commuter flight out on Saturday at 6:15 am and arrived by 6:45 am…an extremely short flight! The Molokai airport is in one word…quaint. There was one car rental place located in baggage claim, which was basically a bench and concrete where they put your bags, and two gates.

After we picked up our rental car and got our bags, we went to have breakfast at a place called the cookhouse. We were the only two people in there the entire time we ate. We both had the breakfast sandwich with breakfast potatoes (see below). 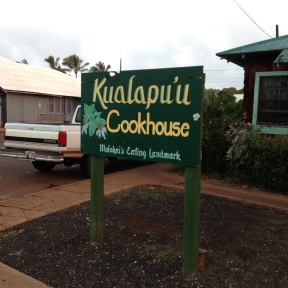 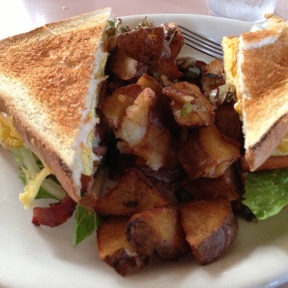 After breakfast, we had about seven or so hours to kill before we could check in to our B&B. So we decided to drive east along 450, which travels along the south side of the island, to see some of Father Damien’s churches. On the way, we stopped to take a picture of Lanai, which you could see very clearly from Molokai. 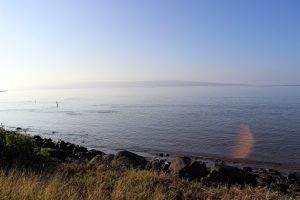 Now back to the history of the churches…Father Damien was a Belgian priest who is well-known for his work with leprosy (or Hansen’s disease) patients on Kalaupapa (more on that later in my Day 3 post). Our first stop was St. Joseph’s Church which was buit in 1876. The church always remains unlocked and vistors are welcome to enter. It was still decorated for Christmas and we were able to go in, look around and sign the guest book. Outside was a statue of Damien, a cemetery, beautiful flowers and a plaque describing who Damien was. 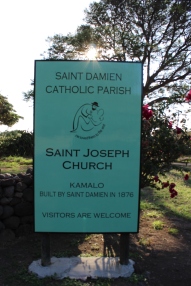 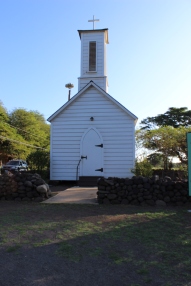 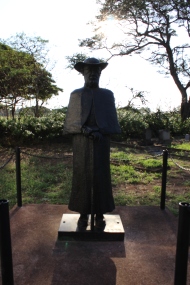 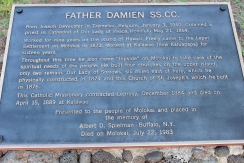 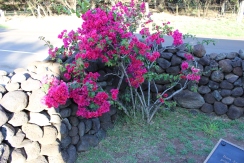 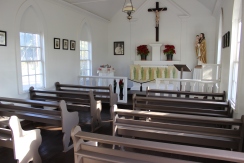 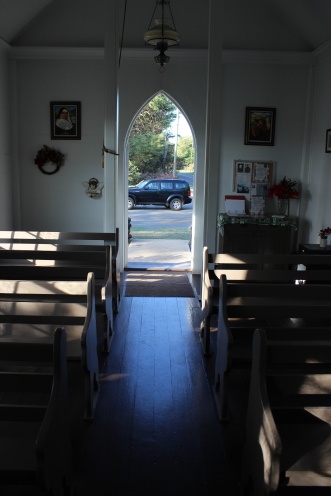 After we went to St. Joseph’s, we continued driving down 450 to see Our Lady of Sorrows Church. It is the second of the four churches that is left on the topside of the island that Damien constructed, and was built in 1874. Mass is still held in this church every Sunday at 7:00 am. 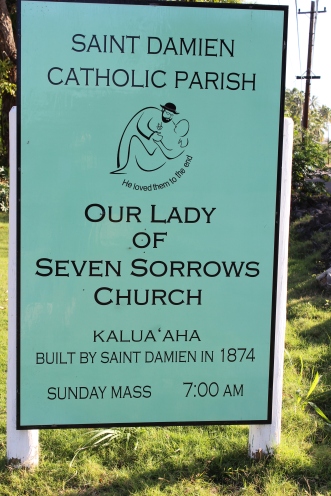 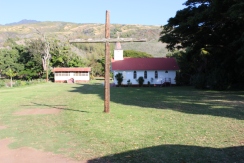 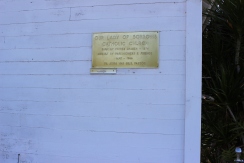 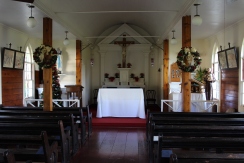 The alter at Our Lady of Sorrows Church. 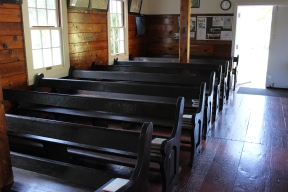 Beautiful wood benches inside the Our Lady of Sorrows Church 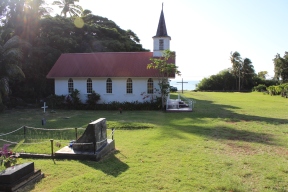 The church with the ocean in the background.

After we visited the churches, we headed back toward the town of Kaunakakai to see the Kapuaiwa Coconut Grove. Along the way we passed multiple ancient fishponds that were created in the 13th century for the use by the royalty. These fishponds were all over the south side of the island.

The Coconut Grove was planted in the 1860s by King Kamehameha V to provide shade for his sacred bathing pools. Each of the 1,000 royal coconut palms represented a warrior in his army and only a few hundred of the palms still stand. 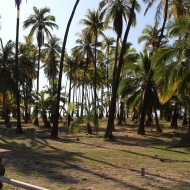 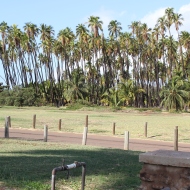 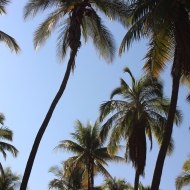 For the afternoon, we wandered over to the west side to Papohaku Beach (also known as Three Mile Beach), which is one of Hawaii’s largest white sand beaches. For the most part, we were here by ourselves. It was almost entirely empty, so we were able to sit and enjoy the massive waves crashing against the rocks. It was definitely not a beach you go swimming in…the waves were incredible (see pictures below). As we were watching the waves, we also got to see whales making huge splashes in the distance! We only saw them twice, but it was still extraordinary to see. 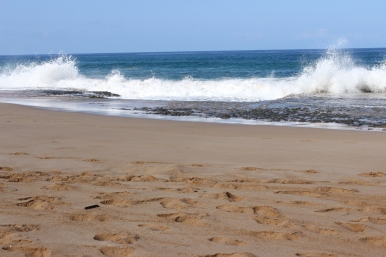 Looking right from our spot on the beach.

Looking left from our spot on the beach.

We spent about two hours at the beach and then decided to drive to Mauna Loa (the town we were staying in) to see what was there. There was a general store and a kite shop…it was a bit creepy how quiet it was..kind of like a ghost town. We had about an hour and half until we could check-in, so we drove back into town and had lunch outside on the patio at the Paddlers’ Inn. This seemed to be the one restaurant that was open all the time…which included past 8 pm at night and on holidays (turns out this woud be good for us). Once we had lunch, it was finally time to check-in…we were both ready for showers, clean clothes and naps. We got to the Molokai Komohana around 4:00 pm and were greeted by Tom. He and his wife Karyl are originally from Michigan and retired in Molokai. They have been running this B&B for about six years now. They were both incredibly wonderful! 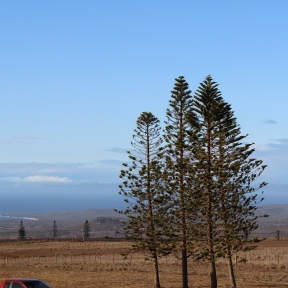 View from the porch of our B&B

After much needed regrouping, we went back into town for dinner at the Molokai Pizza Cafe. We were both exhausted and ready to head to bed after dinner as we had an early start the next day. On the way home we passed a random horse just wandering down the sidewalk on the road to our B&B. We found out later that this horse just roams around (halter and lead rope intact) the neighborhood. He belongs to a nearby neighbor, but I don’t think the horse ventures home much. Turns out this would be the first of many random animals wandering down the side of the road.

And with that, I will conclude our first day on Molokai!