Day 4 turned out to be quite an adventure. We had our last wonderful breakfast and said our goodbyes and thank you’s to Tom and Karyl for being such great hosts. We had rescheduled the Halawa Valley hike, but the weather did not look promising. However, we headed to the east side of the island on the one lane road again hoping we would be able to hike.

The drive there was rainy, cloudy and gloomy…however it made for some great waves crashing against the rocks along the side of the road. The road was so close to the ocean, it felt like the waves were going to crash right into our car. There were many hairpin turns along the one lane road, at times it appeared we would drive straight into the ocean. To sum up the drive in one word: ridiculous. Ridiculously beautiful, ridiculously scary and ridiculously unreal that such a road existed in the U.S….and ridiculous that we drove it twice in 72 hours. 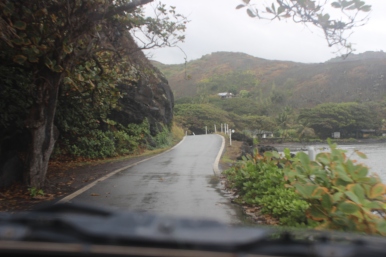 View of the road from the car.

A bit gloomy for our drive. 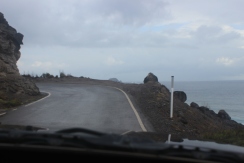 Road before one of the hairpin turns. 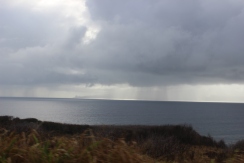 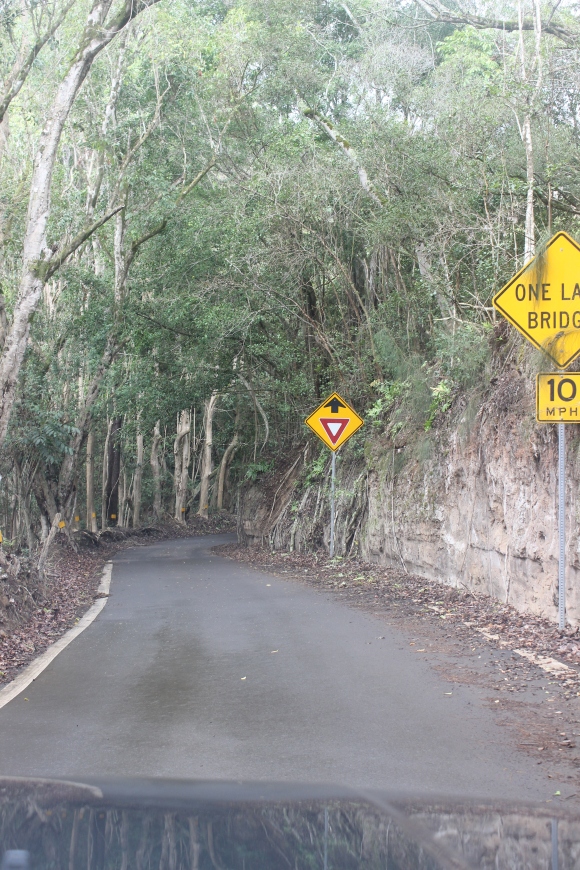 All the signs on the road before a one lane bridge. The bridge was under a beautiful canopy of trees.

We arrived to the place where we were supposed to meet our tour guide, Kalani at 10:00 am. Unfortunately for us it was still raining pretty consistently. This meant that we would not be hiking due to the stream/river we would have to cross to get to the valley. However, Kalani offered us a tour of his amazing flower farm (part of the original tour) and we happily accepted. The flowers were incredible. I expected them to be pretty, but nothing prepared me for how unique the plants would be or how expansive his farm would be. Mom and Aunt Jan – you would have loved this place. Kalani and his family live and work on the farm. They don’t have telephone service, but take orders and communicate via satellite internet service. He goes into town a few times a week to ship his flower orders to the mainland and go to market. Side note: they have to clean the flowers really well for inspection back to the mainland. They have tubs they wash and bleach them in to get rid of any bugs, etc. The flowers keep for a couple weeks if you take care of them properly. Below is a slideshow of the amazing flowers, fruits and various plants from the farm. I have tried to name the ones I remember, but most of them I can’t recall the exact names :).

After the tour of the farm, we headed back into town and had a few hours to kill before our flight. We had lunch at Molokai Burger (one of the only places open on New Year’s Day) and then slowly headed to the airport to catch our flight. We arrived to the quaint airport of Molokai a bit early around 4:00 pm, but figured we would just hang out there until our flight  at 5:35 pm, as there was nothing else to do. Security didn’t even open until 5:00 pm and once we went through, we realized there were no bathrooms (interesting). The weather continued to get worse, but we weren’t worried as flights were still taking off. At about 5:10 pm, they told us our flight was delayed until 6:00 pm…then at about 6:00 pm, they told us our flight had been canceled. Come to find out, this was record rain fall for the dryer island of Molokai (for some reason this seems to be a pattern for Josh and I, re: February in Kauai hiking the Kalalau trail). We knew our B&B was booked for the night and that there was a strong possibility if we didn’t get out, we would be sleeping on the bench in baggage claim at the Molokai Airport. I jumped in line at Island Air to see when we could rebook and Josh went to call Hotel Molokai..on the way he stopped at Mokulele Airlines to see if they had any flights going out. Turns out they had the last two seats to Maui on a 7:00 pm flight if we wanted them. Thankfully, we booked those on the spot just to be safe. We then went back to the Island Air counter to see what our options were. They said there was a possibility of an unscheduled flight coming in around 8:00 pm and we might get on it at 8:40 pm if the weather was ok…otherwise we wouldn’t get out until Thursday. Our instructions were to hang out at the airport and if the plane made it in, we would have seats. This did not sound promising. With the weather getting worse, I felt that there was a strong chance of us getting stuck in Molokai with no place to stay.

We went to hang out in baggage claim, as this would be where we would board for the Mokulele flight to Maui if it took off (obviously…it’s completely normal to board at baggage claim). Around 7:00 pm, they came over the speaker to say we were boarding and a guy opened the door and said “Josh row four and Nicole row five…run to the guy at the plane and he will take your bags”. We ran because it was pouring and quite windy. So when he said we got the last two seats on the plane, I didn’t realize the total number of seats on the plane was nine. Cozy. I, naturally, was in the last row seated between the door and cargo area in this snug prop plane. They closed the door and the pilot gave us a speech about how it would be a bit bumpy and would take us probably longer than usual to get to Maui. During this, I started to panic because my seatbelt wouldn’t work. The pilot had to come back and help me…because it was missing a piece that had been shut in the door…of course. So seatbelt on, door shut/secured and we were ready to go. Or so I thought…we sat there for what seemed like an eternity watching the sheets of rain blow sideways. This was not at all comforting so I decided to take this time to pop a dramamine..I figured it couldn’t hurt, right? Below: a picture from my seat of the plane.

Finally, we started to taxi and eventually took off..to say it was bumpy was an understatement. We circled and hung out in the air for about 45 minutes..being able to watch the pilots point to things on the radar is not comforting. After what should have been a 15 minute flight on a normal day, we landed in Maui safe and sound where we ran through the rain and wind again, picked up our bags off the cart and ran to the commuter terminal which was outside. After about five minutes, Josh asked a random bus driver how to get to the main terminal. We had more running through the rain in our future. Josh grabbed both bags (thank you Josh) and we ran for the main terminal. Once there, we finally found the Hawaiian Airlines check-in counter (we had done our research and knew there were three flights headed for Oahu that night that we would be able to catch). Again, we got the last two seats on the last flight out at 11:00 pm to Oahu. Did we want them? 100% ABSOLUTELY. So, tickets purchased, soaking wet, we headed to security to find something to eat to pass the time until we took off (and to make me feel better as the dramamine I took in desperation didn’t quite do the trick).

Three hours later after some food and Starbucks to warm us up, we were full, dry and taking off on a Boeing 717 (much preferred over the prop plane in rainy/windy conditions). We safely made it home to Oahu after midnight…just a few hours, and an additional island hop, late.

And with that, I will conclude the postings on our Molokai adventures!