After much debate on where to take a trip, Josh and I decided to travel back to Hawaii…as that’s where we really wanted to be. What sealed the deal for us (especially me), was that the Windward Clubhouse for the Boys and Girls Club where I worked was having their grand opening for their new clubhouse…12 years in the making! I knew if I could possibly be there for that, I would never regret it. So we decided to book a 10 day trip to Oahu for some hiking, food and much needed volunteer time.

Our trip started with a 5:00 AM flight to Dallas to catch our connected to Honolulu. After 12 hours of flying, we landed around noon on Oahu. The first stop was checking in to our airbnb near Punchbowl. It was a great location (super close to where we used to live) so we felt like we were close to home. After that, we headed to Kailua for the clubhouse opening. It was so great to see my kids, my old coworkers and how incredible the new clubhouse looked. Many happy tears were shed!

Hugging Tia…we cried in front of everyone.

Josh, Mark and I watching the hula dancers.

After a few hours at the clubhouse, we headed back to Honolulu to have dinner at Shabu Shabu House. I was so excited that Josh documented my excitement waiting on my food. After dinner, we headed back to our airbnb and crashed! Successful first day back in Hawaii!

The next day, we woke up early and decided to grab breakfast at Cinnamon’s before I went to volunteer. We split one of their mac nut cinnamon rolls and an omelet. A great way to start the day! 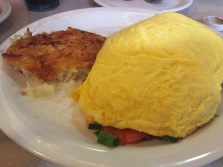 After that, I spent the day at the clubhouse volunteering. Pictured below: some of my favorites painting their nails!

After a day of volunteering, Josh and I headed to the Kailua Farmers’ Market to grab dinner. It was delicious as always! 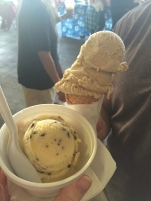 After the Farmers’ Market, we headed back and crashed for the day!

On Friday, we woke up and went to Lanikai juice in Kailua for an açai bowl. I was so very happy!

After breakfast, it was another full day of volunteering for me. It was a rainy day, so not much going on outdoors! Our plan was to hike Koko Head in the evening, but we got rained out. Instead, we decided to go to Soul de Cuba for dinner! We both ordered Fricase de Pollo. 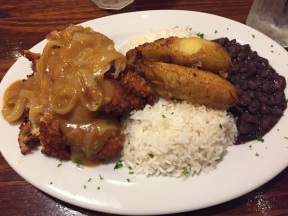 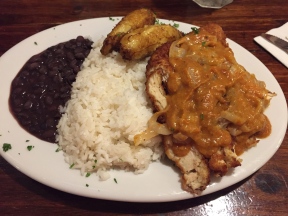 Pretty good start to our first few days in Hawaii! More to come!